In this post I’ll try to describe the main components:

As mentioned before, I used a specific strip of programmable LEDs – with a desired pitch between LEDs to simplify the process, so there’s no need to cut and re-solder them, and we can use a complete length per row with connections only between rows.

The length (or to be precise: number of LEDs) is still within acceptable range so that we can feed power from only one end without having to worry about providing it into smaller fragments.

I started with cutting the LED strip into pieces of desired length (8 LEDs for each row), along with wires to connect them all together. Notice the order I used (every other row goes in the opposite direction, to minimize the wiring – this is easy to account for in software):

I used the outer most elements of the grid as a guide and glued the LED strip onto the base of the board: 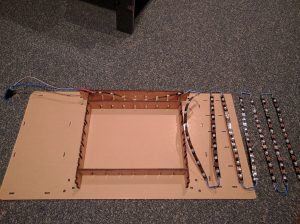 And this is how it all looked in the end, with the grid back in its place:

I went through few iteration between I ended using a custom PCB for mounting the hall effect sensors.

Here’s an overview of my attempts:

Custom PCB (for sensors and resistors)

I made a design in KiCAD (open source software, fairly easy to learn, and once you get the hang of basics it helps to know the keyboard shortcuts [i.e. for “vias”] which speed up the process significantly).

I ordered mine from https://oshpark.com/. I’d recommend them – great service, their panels for manufacturing fill up very quickly, so you won’t have to wait for days before it’s even processed. Without paying for faster processing, the complete turnaround is about 2-3 weeks.

OSHPark requires the orders to be in multiples of 3, so that leaves us with 8 for the board and 1 spare: 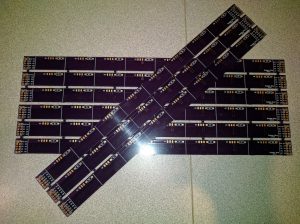 Notice that the PCBs are symmetric, so they can be used “from both sides” (front/back) – something I decided to do to keep the overall board layout symmetric – notice which side of the row they’re close to on the top vs bottom half of the board in the last photo below.

I made a helpful rig to make sure all the sensors are centered and in the same distance from the board (we can see their shadows from the LED highlight, so I wanted to make sure it looks symmetric) and soldered them to the PCB, along with 10kOhm resistors:

Critical thing to keep in mind: make sure the sensors are oriented the right way. That is, all of them are facing the same way, and that this is the right way for them to face – check with the magnets/magnetic game pieces you’ll be using.
The ones I used are unipolar (they react only to one pole from one side, and the other from opposite side) non-latching (as soon as magnet leaves the range, they change state, and don’t require the opposite pole to be in vicinity).

Then each PCB had the headers soldered on and was connected to Arduino Mega (Vcc and Ground were not connected in this step yet):

I used 5V 8A power supply, along with a 1 female – 3 male DC jack splitter (see BOM at the top for details):

I used another perfboard to make a quick splitter (Vcc, Gnd) with headers for quick connection to the custom PCBs with sensors: 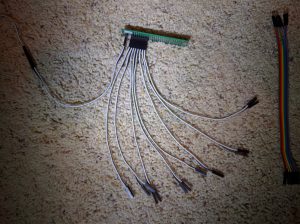 Connecting it to Arduino

We’re using Arduino Mega because we need a lot of I/O. And since analog ports can be treated as digital (but not the other way, obviously), we have enough of digital I/O to read states of all 64 hall effect sensors, address LEDs, handle switch/button and more (but we’re just 3 outputs short of being able to use LCD screen…).

Note that the software will account for the order in which you connect the rows/sensors, but it’s convenient (and looks better 😉 ) to keep the wires organized.

I must admit that it was a bit of an afterthought. When writing code for the first game (Checkers) I wanted to make sure that the game can be handled using only the pieces on the board (i.e. when current game ends, and the animation indicating winner completes, we go to a state where 2 corners are highlighted, and if all game pieces are removed and only those 2 cells have pieces on them, we restart the game). But that seemed to be limiting (i.e. can’t start a new game without finishing current or having to restart the board altogether) so I added a button.

And switch is there to allow selecting between 2 games, but ultimately I’ll use the reset button to cycle through available games, or add another button, as switch (simplest SPST) limits us to just 2 games.

After everything was connected together, it was time to make sure things work as expected 🙂 I wrote simple code to go through the LEDs and light them up. Notice the reversed order in every other row – this is caused by the connection between rows, and will be changed in the software:

Knowing that LEDs work and I can trust them 🙂 the time has come to verify if all the hall effect sensors react appropriately to the magnetic game pieces. This is also great moment to “calibrate” the sensors – as in, remember which input port in Arduino corresponds to sensor in which cell:

Next, we’ll be bringing life into the electronics:

4 thoughts on “Smart Game Board – Electronics”