I’ve been wanting to try out zooming on a jet ski for years now, yet somehow the opportunity never presented itself… Places I looked into required booking for the delivery of a jet ski to one of few places a company serviced, and it seemed hard to coordinate that with our summer plans (maybe an opportunity for a business – “walk in” jet ski rental at a popular location? 🤔).

Luckily, my friend Bryce is a big fan of those machines, and offered me to take one of his jet skis for a spin. Plus I definitely benefitted from his instructions 🙂 Thank you, Bryce!

Bryce had them loaded up on a trailer and we headed to nearby park to unload them. I like how it was a rather small, hidden park with no crowds, and we got into the water immediately.

Quick rundown of the basics, safety briefing and we’re going!

At first, I had an impression that jet ski was steering itself, and I felt like I was continuously leaning in the direction opposite to the turn, thus upsetting the balance. It was, after all, my first time on a jet ski. But riding motorcycles could’ve helped a bit, since in few minutes I built enough confidence to lean into the turns and thus point the jet ski where I wanted for it to go. This quickly turned into a muscle memory.

I did fell into the water once though… while jet ski was stationary and we were having a chat! 😉 This is when they’re most unstable though. Lesson learned. And flipping them up-right in the water isn’t all that difficult, so no need to worry.

The throttle response on those machines are very pleasant! They pick up the speed very rapidly, and – on a bit less calm water, in a somewhat brutal way. It’s a blast. Speaking of “brutal”, I was surprised how rough the jumps over waves feel at speed (well, technically, it’s not the jumps, it’s the landings 😁).

All in all, an amazing day on the water.
Sun, waves, water splashing in my face, accompanied by the sound and smell of a 2-stroke 💪🌊

Check out a brief video I made!

And here are a few photos: 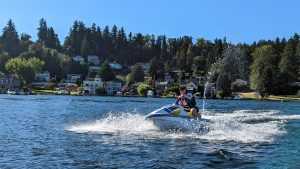 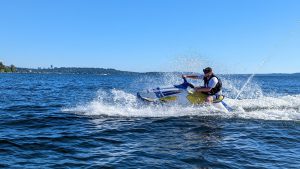 Again, thank you to Bryce for showing me the beauty of hooning on jet skis 🙏